The Science Fiction Research Association (SFRA)’s 2019 conference was held in the Pacific this year in an attempt to be more accessible to science fiction researchers in this area, and I think it succeeded to some extent. This was the first time I was able to attend (although the New Zealand-US exchange rate was still challenging), and there were several other students and early career researchers I met hailing from Australasia. The conference theme was “Facing the Future, Facing the Past: Colonialism, Indigeneity, and Science Fiction” with the keynote speaker being author and professor Dr. Nalo Hopkinson. The theme was interesting and challenging and presenters engaged with it in a variety of thought-provoking ways. The conference hashtag was #SFRA2019, although there was not a high Twitter engagement. The conference aimed to provide a contained space for people in the parallel sessions to test out ideas and share their research with peers; therefore, I have only mentioned the general topics that were covered and included notes on the broader workshops and panel discussions.

Sidenote: The university was situated on a hill overlooking Waikiki and Diamond Head Mountain, which made for some beautiful views. 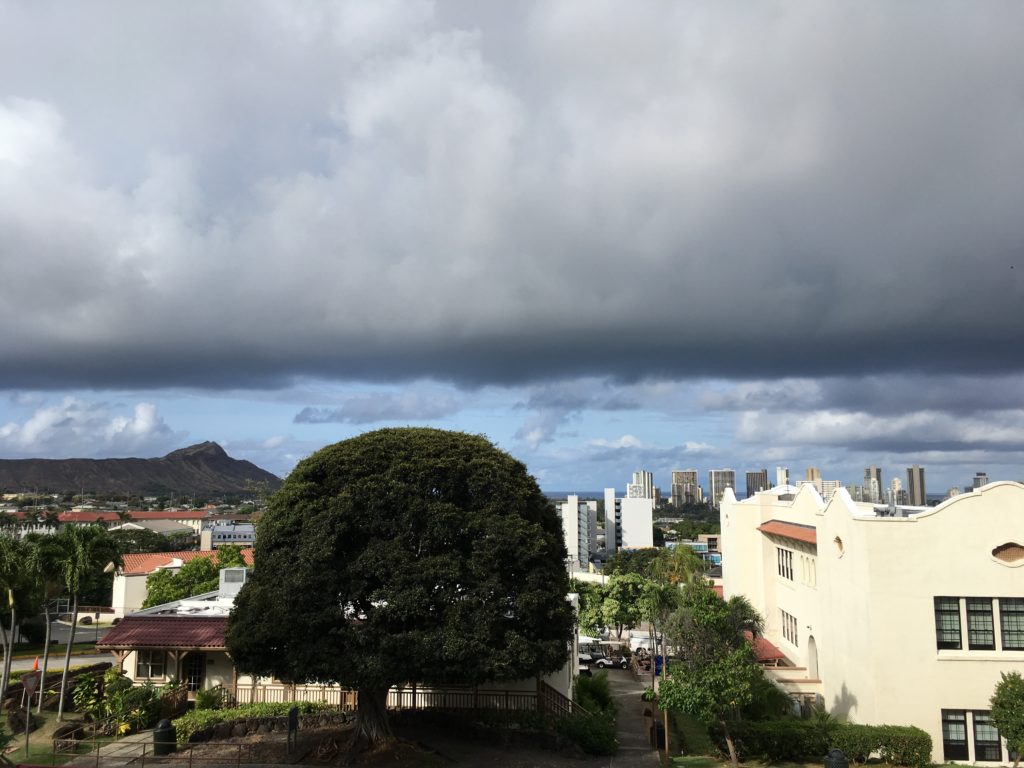 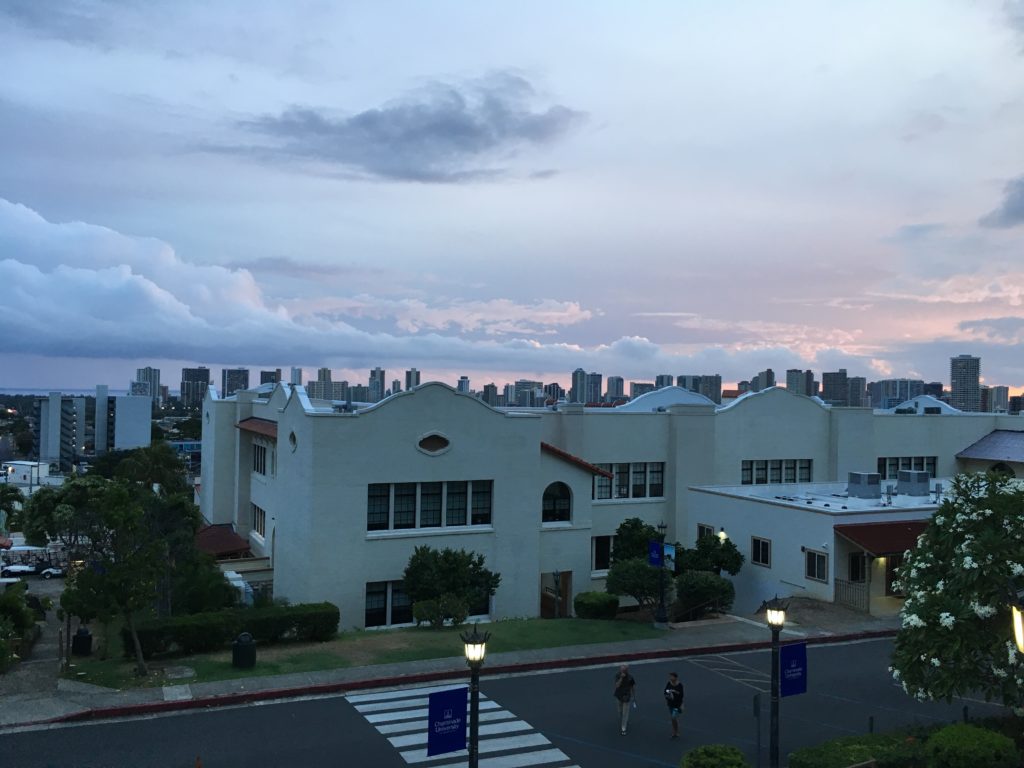 Also, a local independent bookshop (da Spot) had a stall one of the evenings and I discovered some exciting finds, and I thought that some of the titles should be more well-known in New Zealand since the collections feature short stories from Aboriginal Australian and Aotearoa New Zealand Māori writers. I look forward to reading them and trying to raise their profile. 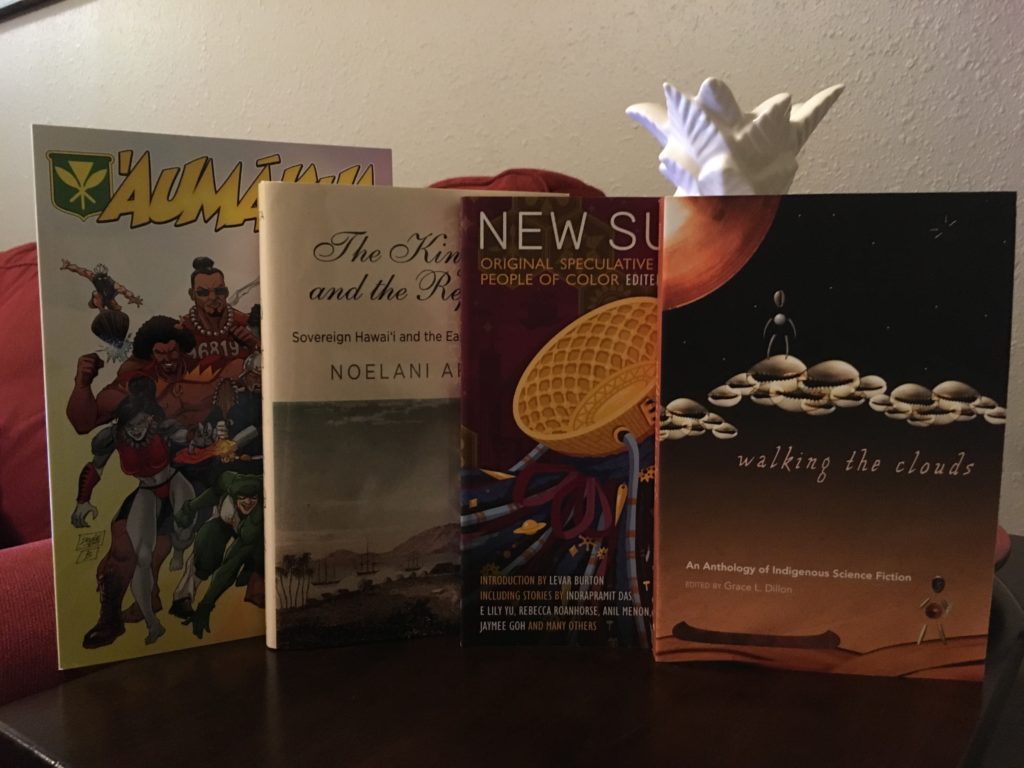 The first day consisted of professional development sessions aimed at postgraduate students and early career researchers, with plenty of helpful tips about academia and publishing. Some helpful tips to consider if you happen to get a job offer in the elusive world of academia (but also applicable to other job opportunities as well):

There are other things to consider to prepare, too. Look at service opportunities on committees as a potential way of gaining experience. Remember to think beyond your specialty area since teaching more general undergraduate classes is much more common than small, upper-level courses that can be more specialized. Consider doing book reviews as a way of honing your writing skills and getting experience (also important if you want to become a freelance writer), and look at both science fiction and non-science fiction places to publish as science fiction becomes more mainstream (e.g. Strange Horizons, Locus, Los Angeles Review of Books).

Check out The Professor Is In website and/or book to be more prepared for the realities of the academic job market. Author Karen L. Kelsky, PhD, provides tips on translating teaching activities into ‘business speak’ for your CV/resume. Be aware that #altac is trendy but being an independent scholar is hard to juggle. Consider careers in publishing although these are also increasingly competitive, or grant project management. Have an active Twitter account. Look at the MLA Job List but also follow relevant hashtags for more recent job postings.

Be aware that community engagement can be seen as positive or negative depending on the institution and their focus. ‘Hot’ new things are edtech, science and technology studies, digital literacy, digital humanities, STEM-connected things, and game studies. The Society for Literature, Science and the Arts was recommended for its Configurations journal and a good conference in California.

Although the title of this professional development session sounded boring, Pawel Frelik’s overview of various digital tools and programs for organizing research and getting things done more quickly and efficiently turned out to be very useful. It also made those of us who still do things the old-school way by organizing info into folders and hoping we remember them feel like it would be worth learning something new. He helpfully created a page with all of the links for future reference (sfra2019.tumblr.com).

He discussed the overall management systems of Evernote (Windows) and Devonthink (Mac) and highly recommended the latter for those with Macs. There are case studies on its website for how to use it in academia. The benefit of these managers is that you can dump everything, all types of content, and it will be fully searchable. You can also email things into Evernote. Frelik suggested using tags instead of relying on folders.

He recommended Instapaper over Pocket for having more features. These create a virtual shelf of things to read later. They also act as an archive in case the original page disappears. Instapaper cleans up the text and backgrounds to make it clean and light.

For PDF management, he said Sonny Software’s Bookends (for Mac) is good because it can change the name of the file according to any pattern you want and can also generate bibliographies. The GoodReader PDF reader app can extract just the highlighted bits into Evernote. Highlights (Mac) is another PDF tool.

For note-taking, he recommended plaint text or markdown for notes rather than Word, Pages, or OpenOffice (in other words, avoid using proprietary software and formats that will come with extra formatting). For backing up, he recommended at least having one copy on-site and one off-site (like Dropbox). He briefly discussed the zettelkasten note-taking process developed by social scientist Niklas Luhmann (1927-1998), which uses sheets or groups of index cards and a system of numbers (like tags) to organize information. With the digital tools now available, it is possible to create a hyperlinked environment.

Other information mentioned was the word processing program designed for writers called Scrivener, that Google Docs works with Zotero now, and that searching for ‘Github for research’ shows helpful information about Github as a tool for researchers.

Bryan Kamaoli Kuwada put forth some challenges for science fiction. Kuwada said that science fiction is usually either all shiny and steel or apocalyptic and rusty, but this dichotomy is missing a connection and responsibility to the land. He asked, what if our timeframe was not on fiscal years but on the lifespan of our people, 200 years +? He showed a video from KaUmeke.org, the website for Ka ‘Umeke Kā’eo, which is a Hawaiian language immersion school and learning community. He also discussed involvement in putting on a Hawaiian carnival to encourage Hawaiian to be spoken outside the classroom. It included signage and sought to imagine a world where Hawaiian was spoken (see Kāniwala Aupuni Hawai’i). In response to Arista’s talk on the Hawaiian Language Archive, Kuwada noted that there is not a lot of pre-made Hawaiian language curriculum available, so for 30 years people have been making it themselves and others are trying to aggregate it to preserve it.

Noelani Arista’s talk was on “The Mo’olelo in the Machine: Memory Loss and Data Retrieval: Customary Knowledge and the Promise of Digital Futurity”. Arista said that Hawaiians have been using technology all along for transmission of knowledge but also for creation (from using the printing press after the arrival of the missionaries up until digital media now) and discussed the Hawaiian Language Archive. She said, we are overdetermined by images that sell Hawaii (such as the examples of what Google images show when you type ‘aloha’), and asked, how can we use video games to allow kids to connect with native culture? She referenced a co-authored essay called “Making Kin with the Machines” and said one issue is that tech literacy is often privileged over training in language and traditional things, and there are still a privileged few in control of tech.

Solomon Enos got my attention right off the bat by describing how he grew up working in the taro fields and reading Frank Herbert and about the Bene Gesserit and seeing a daughter having a daughter and 37 generations of science experiments producing what the women were searching after. He was so passionate about life and art and making the world better – it was refreshing. He said empathy is the most important tech we will ever have, that and being nice; we are the problem and the solution; and the attitude of no-can is just kindling for can. In other words, we can do it; we can create a win-win-win situation for humanity. Enos created 400 book covers to imagine what the world would look like if a para-Polynesian culture were uninterrupted (i.e., no colonization), with each cover celebrating a centennial (so a 40,000-year timeline). He has worked on the project for 15 years and said it is releasing next month. Each one is an image with a title, and war becomes obsolete after 10,000 years. He challenged the idea that people say people will always kill each other. Maybe not, he said. Maybe we can get over our dirty habits. He said he is very interested in visualizing hope. (See his artist website)

There were so many topics discussed by people from all around the world at the conference. The ones I heard about included:

It was exciting to hear about the work being done by the Purple Mai’a Foundation, a technology education nonprofit organization that is teaching coding to underrepresented groups of students and using place-based and cultural education. Another thing of note was that Professor Grace Dillon has created a list of indigenous futurisms in books, graphic novels, video games, etc. that she gives out, and she allowed those who wanted to to sign up with an email address to receive when it has been updated. I noted that there were several references throughout the conference made to incidents in Hawaiian history that were assumed to be known to everyone, such as ‘the Overthrow’ (what I gathered to be the takeover of Hawaii by businesspeople). It was a reminder of how much certain pieces of information become so much a part of the fabric of one’s life that one can forget that this knowledge is not known to outsiders. But it also was said in such a way that made me want to know more, like the state that many think of as a vacation destination has a lot more to tell of its history that is important. I also found it interesting not only that Wikipedia seems to be being cited more and more by professionals, but that someone would include it in part of their presentation when the page has warning messages about issues with the content. It would great if researchers would spent the effort to update key pages related to their research to improve the content for everyone else.

Resources to check out

For those who are looking for resources to check out, here are some that were mentioned: