The 2007 animated short film Flatland: The Movie featuring the voices of Martin Sheen and Kristen Bell appears to be a popular teaching tool in math classes because it includes angles and other math concepts, but I have found it also works well in science fiction classes [see film website for more information]. Its short running time (around 30 minutes) allows it to fit into a normal class session with plenty of time for questions and discussion. It is based on  Flatland: A Romance of Many Dimensions (1884) by Edwin A. Abbott and set in a society known as Flatland, a two-dimensional world. The graphics and pace are good, the themes are still relevant today, and there is a delightful irony in one of the characters who brings wisdom to others yet still cannot break free from his own limited worldview. It offers a nice break from the norm toward the end of the semester while still being a science fiction film that allows students to compare their world to the one in the film. 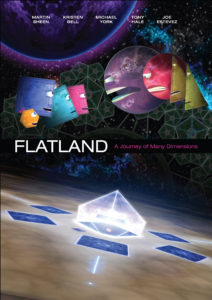 Based on Flatland: A Romance of Many Dimensions (1884) by Edwin A. Abbott

Which character did you identify the most with?

What are the rules of Flatland society? How does your shape affect your status?

Who makes the rules in this society?

What does heresy mean? What kinds of things are considered heresy in your society?

Why can’t the King of Lineland see the square? Why does Spherius resist the idea of a 4th dimension?

Compare our society to Flatland’s society. What are the similarities and differences? Which would you prefer to live in?

*Some questions are from a math teacher’s wiki; others are my own. The possibilities for more science fiction questions are many!