I first heard about effective altruism through a guest lecture by Dr. Catherine Low from Students for High Impact Charity on “Effective Altruism and the Environment” in December 2016. At the end of the lecture, the audience split into small groups to debate the merits of several charities that she had pointed out were effective in various areas, and then everyone voted on which one to donate $500 to (with the funds provided by her organization). There was also an opportunity to sign up to receive a free copy by mail of a book by William Macaskill entitled Doing Good Better: Effective Altruism and a Radical New Way to Make a Difference (first published in 2015), so I signed up, not being able to resist a free book and wanting to learn more about the evidence behind this emerging movement. 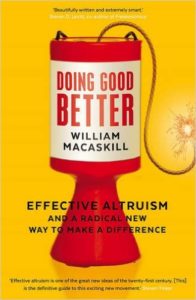 The thinking behind it offers an interesting critique of the personal-responsibility kind of changes we’ve been led to believe we should be doing, and I’d like to offer some highlights from the lecture and book that people may not have considered before (especially regarding Fairtrade and sweatshop goods!).

Dr. Low’s main thesis was that effective altruism is about using evidence and analysis to do the most good we can do, and that many things we might think are really good aren’t actually making the best use of our money, time, or resources. One of the examples was that the BBC in 2006 was freaking out about Brits keeping phone chargers plugged in because of the ‘ghost energy’ they were wasting. But it turns out that they hardly consume any energy (.01% would be saved by unplugging them). Yet people choose to focus on these minor, inconsequential issues rather than looking at the bigger picture. There was also a study by David Anderson that found that up to 75% of social programs in the U.S. had little or no effect. It turns out that many initiatives aren’t really studied at all and are based on someone’s gut instinct on what will do good rather than research. An example that she mentioned and that is in the introduction of the book is the Playpump, which was rolled out in Africa to get children to help pump water while playing but turned out to be quite ineffective. It was created with the best of intentions, but not enough research and design went into seeing if it would actually work.

Regarding New Zealand charitable giving, she asked us to compare the $40,000 cost of training a guide dog (which who could argue against that cause) with the $25 for cataract surgery to prevent blindness in the Global South. It is clear which one is a better value for money, but that doesn’t mean that people donate according to that criteria. There was also the comparison between $9,000 for a Make-a-wish holiday for a sick child compared to a far lower amount to buy bednets against malaria and save a couple lives in Africa. Again, the former is a nice cause, but the latter makes the money not only go farther but can actually save lives.

Dr. Low said that part of the reason why effective altruism is more possible now is that we have more information to make better decisions about giving. She listed the following places that provide this kind of information:

There is also Stanford’s Carbon Footprint site where you can calculate how much greenhouse gas your activities produce. If you see how much your airline travel is producing, for example, you could offset it by donating to an organization like CoolEarth, which for $350 can protect a hectare of rainforest. This might be more effective than buying an electric car, because there are other costs and issues you need to weigh — if you don’t do that much driving, you could have spent the extra money on a more effective way of protecting the environment, for example. In the same way, you probably don’t need to fret over the Energy Star Rating for appliances, because the $100 or whichever amount you would have spent on buying a more efficient device might be better spent on a charity, since you’re unlikely to get as much energy savings as you think, especially if you use it infrequently. One of questions she left us with was: Are we more morally obliged to prevent human-made suffering (like climate change) or naturally-occurring ones (like malaria)? It’s something to consider as we choose which causes to support.

The book reiterated the point that some ideas are good but are not actually the most effective, or the best use of resources, and most are not evaluated to see if they are working. It offered several seemingly harsh realities, including:

As presented in the lecture and the book, effective altruism makes a lot of sense from a rational perspective. The trick is that so many charitable appeals work on an emotional level (or religious level), and the urge to help others we can see, in our community, probably won’t be going away any time soon. Thinking more abstractly about giving is certainly a new concept to consider thoughtfully.