Watching the film Hidden Figures reminded me of my research on women in computing and some of the gender issues in the field of Digital Humanities. In a discussion after the screening that I had both attended and helped to organize/promote with other women (as a special fundraiser to help create an undergraduate scholarship for a woman to study STEM), I mentioned how frustrating it was that women had been written out of the history of computing at large, not just in regards to the space program. It was only after seeing the quizzical looks on the women’s faces around me that I realized the presence of women in computing is not common knowledge either. The stereotype that seems to predominate in the popular culture is that computing belongs to Silicon Valley and male computer programmers.  I have been fortunate to have discovered more of women’s history in computing due to my involvement with Digital Humanities, but it is important that the involvement of women become more widely known. So I write this post as a brief introduction to some of the insights I have come across – to share with those who want to learn about some ‘hidden figures’ and to wonder about whose stories are still left to be discovered in the field of Digital Humanities. Because in fact, women have been instrumental to computing since the beginning… 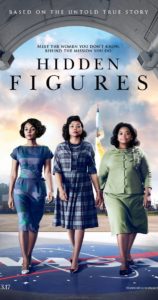 For those who haven’t viewed the film (highly recommend! – nominated for three Academy Awards), Hidden Figures follows the stories of three African-American women – Dorothy Vaughan, Mary Jackson, and Katherine Johnson – in the U.S. during the Space Race whose efforts in computing, mathematics, and engineering were crucial to the success of the mission to put astronaut John Glenn into orbit. Each woman must overcome various obstacles including racial and gender biases in order to be taken seriously and be respected by her coworkers, and to succeed at her job. For example, one building lacks a bathroom for black women (bathrooms were segregated at this time), and it is not until this issue impedes on the mission’s ability to meet a deadline that something is done about it. The film showcases the genius and resourcefulness of these women whom I and others I talked to admittedly had never heard of before. This film did a great job of bringing their stories and brilliance to life.

Ada Lovelace (1815-1852), born Augusta Ada Byron, was a gifted mathematician who is now considered to be the first computer programmer, given that she wrote instructions for the first computer program, all the way back in the 1800s. She was the daughter of the famous poet Lord Byron and his spouse, Lady Anne Isabella Milbanke Byron. She met Charles Babbage, known as the father of the computer, when she was 17 and he mentored her and enabled her to study advanced math with a University of London professor. Although Babbage invented the difference engine and analytical engine, after Lovelace was asked to translate one of his articles, she added her own ideas about his machine which were about how codes could be used to handle letters and symbols, not just numbers. She also came up with a theory for repetition of instructions, now known as the looping process that modern computer programs use. Though few paid attention to her article when she was alive, she is now honored through the celebration of Ada Lovelace Day, first held in 2009.

During World War II when there was a need for ‘human computers’ who could solve equations by hand and also program computers, women stepped up to fill these roles. Jean Jennings Bartik was one of six female mathematicians who created programs for a new machine belonging to the U.S. Army called the ENIAC (Electronic Numerical Integrator and Computer), which was one of the first all-electronic general-purpose computers. Men built the hardware and circuits but didn’t think the programming was an important job. Bartik said in an interview in 2008 that even though the women were responsible for getting the machine to work the night before its first demo, they weren’t invited out to dinner the next day and weren’t named in the photos. They were basically invisible. Adele Goldstine was another key woman in the development of ENIAC who created a systematic method of programming and the program manual, yet has only recently been acknowledged for her work in the field.

After the war was over, Bartik and her team moved on to the UNIVAC, a major commercial computer. They worked with Grace Murray Hopper, who was a tenured math professor in the Navy Reserve. Hopper discovered a way to program with words instead of numbers, which became a programming language known as COBOL (Common Business Oriented Language) that is still used today. She retired from the Navy with the rank of rear admiral and is sometimes known as being the Queen of Software for her work in developing programming languages. There was even a 1967 article called “The Computer Girls” in Cosmopolitan magazine which quoted Hopper as comparing programming to planning a dinner, where you have to plan ahead and schedule everything.

She said women are ‘naturals’ at computer programming and her goal was that all people should be able to use and program computers. Another woman who worked on the UNIVAC, Adele Mildred Koss, actually found that working in computing was quite accommodating to female programmers who were mothers, making a work-life balance more possible. Many women did not actually have formal training in computing but took advantage of the opportunities that it provided and found success.

This brings us to the history of women in the field of Digital Humanities. For those who haven’t heard of Digital Humanities, it is a relatively new field which sits at the intersection of digital technologies and the humanities (like English literature, philosophy, and history). It sometimes functions more like the sciences in terms of having labs and teams rather than individuals working alone, and can include projects that involve making websites for cultural material, using databases, creating network analyses, examining social media, and doing other tasks that further the study of human culture and generate new ways of teaching and researching. Before it was known as Digital Humanities, however, it was sometimes called Humanities Computing, and its history goes back to the 1940s with its father, Father Roberto Busa in Italy, and what is considered to be the first Digital Humanities project.

Father Busa was a Jesuit priest who thought that the newly developing computing technology could be harnessed to help him create an index of the works of St. Thomas Aquinas. He went to the U.S. to visit Thomas J. Watson at IBM and received some assistance to process punchcard data to make his index, which included some 9 to 11 million words of medieval Latin. What is often left out of this story is the fact that Father Busa then employed dozens of women to do the programming, and he proudly believed he was helping them attain valuable job skills through their work on the project. I only know about these women due to Digital Humanities scholar Melissa Terras’ work on uncovering the stories of these women. In fact, she has written a blog post (for Ada Lovelace Day, 2013) about her research, which included traveling to Italy and obtaining permission to share several photos of the women with permission from the CIRCSE Research Centre at the Università Cattolica del Sacro Cuore in Milan, Italy with a Creative Commons license (CC-BY-NC), which are also in the blog post. I have included three of them here:

(This last photo is my favorite, with Ms. Canestraro reminding me of Princess Leia, surrounded by men but seemingly unperturbed.) I consider it a point of pride that women were so instrumental in working on this pivotal Digital Humanities project. But the pioneering work of women in computing leads me to wonder how we moved from women being so connected with computers to the present, where research continues to show that women often feel alienated from computing.

Despite women’s instrumental roles as ‘computers’ themselves and as programmers, by the 1980s, when Steve Jobs and Bill Gates began to appear in the media and personal computers came about, the number of women who majored in computer science began to drop. From the 1980s to 2010, females went from being 37% of college students receiving bachelor’s degrees in Computer and Information Sciences to 18%. This happened even though the overall percentage of female college students was increasing and women were a majority.

There may have been several reasons proposed for this gender shift. Men may have wanted to get into the challenging tasks of programming and with their entry, the field may then have become more prestigious. Professional associations that excluded women may also have prevented them from entering the field. Personal computers were often marketed as toys for boys and the stereotype of the male computer geek became more prevalent in the popular culture.

In just a few decades then, computing and information technology became seen as male-dominated fields, and computing culture became decidedly more associated with masculine traits. The history of women’s achievements is only recently being recovered, with many girls and women unaware at how influential women have been in the field.

Where are the Women?

I see this as relating to Digital Humanities in that I have seen the field struggling recently with issues of diversity, access, and privilege, and that people are speaking out to try to address them. During Digital Humanities scholar Deb Verhoeven’s speech “Has anyone seen a woman?” at the 2015 Digital Humanities Conference, she boldly took the stage and called for men to exit it to allow more women to be heard and recognized. She was addressing the invisibility of women after a “parade of patriarchs” had dominated the stage on the opening day of the conference.

Soon her words ended up having a direct impact on me because just days later I was asked to speak on that very same stage at a small gathering of people for an annual meeting. At first I balked but then was encouraged by two men who were trying to heed her words, and it ended up being a positive experience. Her voice had raised the consciousness of many, and it helped persuade me that it was important for women to be heard even if they may not feel comfortable with public speaking.

Raising women’s visibility – both past and present – and reclaiming women’s history and stories is an important part of feminism; there are countless achievements to celebrate, from small to large. The question becomes how does a field like Digital Humanities avoid making the same mistakes as the history books have with the African-American women at NASA and women in computing? How does it avoid obscuring the labor that often goes on behind-the-scenes in Digital Humanities projects?