A Week of Women in Australasia - Kennedy HQ
Skip to content

During the week before International Women’s Day on March 8, I had the privilege of attending two events about women’s issues with a variety of women speakers, and so for an event that I spoke at on the day, I decided to summarize and share some of the points that these women had made with my audience. These points give an indication of some of the current topics that women are dealing with and raise questions about what the way forward is when women are still less visible and considered less valuable than men. 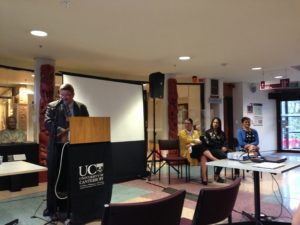 The first event was the Indigenous Women and Leadership Speakers Forum hosted by the New Zealand Human Rights Commission. Sacha McMeeking, head of the University of Canterbury’s Aotahi School of Māori & Indigenous Studies, spoke about the difference between Western styles of leadership and Māori styles. The Western style is often about having a charismatic leader who is a type of hero figure, whereas the Māori style recognizes a distributed network with servant-based leadership, where the leaders are supposed to be in it not for themselves but for their community. Māori women, she said, have been doing things that the storybooks don’t tell because they are behind the scenes, but we can miss them if we’re looking for a leader at the front. I thought this was a useful way of thinking about issues of gender, because something that comes up quite often is the struggle for women, especially in male-dominated fields, between adopting ‘masculine’ styles or operating in a different way and perhaps being penalized for it. Shifting our conception of leadership and not thinking that there is only way to be a leader is a way of breaking out of that mindset.

The next speaker was the president of the Māori Students Association, Hana Skerrett-White, who reiterated that she is who is today because of a long line of strong women modeling leadership to her. She said leadership isn’t singular, and even though women’s voices and indigenous voices have been muted at times, that doesn’t mean they weren’t there. The final speaker was Arihia Bennett, who is Chief Executive of Te Rūnanga o Ngāi Tahu, and she encouraged young women to not wait until they’re older to step into leadership. She emphasized some characteristics of leaders that she thought were important, including competency, compassion, and character. She said to be confident, courageous, and speak your mind—don’t hold back—but also have someone alongside you to push you beyond your comfort zone. You can be humble while still recognizing that you have something to contribute, so listen to people who are encouraging you.

All About Women Satellite (#allaboutwomen) 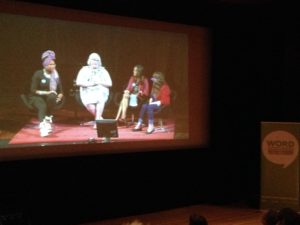 The second event was the annual All About Women Satellite streamed from the Sydney Opera House by WORD Christchurch. The actor Geena Davis spoke about women and the media, specifically how underrepresented women and girls are in films and television. She started a research institute to gather data and the results aren’t pretty. The good news is that the media is powerful and can be used to change people’s perceptions, and she said the year The Hunger Games and Brave movies came out (2012), girls’ interest in archery went up over 100%. Forensic science is attracting many women, even more than universities can keep up with, due to women in shows like CSI and Bones. But when it comes to the television shows made for children, the percentage of female characters is still pretty low, around 20%. This is similar to the percentage that women have stalled out at in other professions like engineering and IT. Crowd scenes are only about 17% female, making it seem like women don’t gather or aren’t valuable enough to be portrayed. The numbers are even worse in fiction than in real life, so women scientists and other women workers are a smaller percentage in media than in the real work force. There’s something called symbolic annihilation, which happens when you don’t see anyone who looks like you or reflects you. By feeding children this imbalance, she said, we are unwittingly teaching them that girls and women don’t matter as much or aren’t interesting.

Davis noted that overall, the ratio of men and women in film has remained about the same as it was in the 1940s, and when women are portrayed, they are often the sidekicks or romantic interest.  But although making changes in real life leadership, etc. are hard, she said that media could fix the problem it has created almost overnight if it changed to include more women. The next movies could show gender equality, show 50% women in science, technology, engineering, and mathematics, 50% women as presidents and members of parliament. One media producer has made the commitment to have 50% women crew behind the scenes as well, so that might be another way of driving change in the industry – for men in positions of power to commit to gender equality and actually follow through in their hiring practices.

Then there was a Nasty Women panel featuring Yassmin Abdel-Magied, Van Badham, and Lindy West, and chaired by Fauziah Ibrahim. They discussed a range of issues, including the need to stand together to gain strength and how to deal with trolls. West said that we have power and leverage only in numbers. If one woman stands up against sexual harassment in the office, she might be fired or ignored, but if every woman stands up against it, change can be more likely to happen. Abdel-Magied reminded everyone that historically it hasn’t been people in power saying Yes, we want to help the marginalized, it’s been masses of people demanding it. And if you’re fuming but don’t do anything about it, like contacting your representatives and talking to other people about the issues, nothing will change. West said that she tells people that running for office is not something that other people do, it’s something that’s part of civic responsibility. Regarding trolls, West said that it just wouldn’t happen that a panel of men would be sitting discussing Oh, yeah, I got a petition to have myself fired today, you know.. She said she’s tired of being told it’s just the internet, that’s the nature of how things are. We’re just trying to do our jobs, she said. The culture has to change. Badham said she would rather die on the right side than do nothing. When it gets hard, remember the women who went before you and the ones who will come after you. Women have died for the vote, for rights, for the freedoms we take for granted. Your actions are the most powerful political statement you can make, so make them count, she emphasized.

The broadcast is supposed to be made available sometime on YouTube.